For starters, the humble potato was once farmed in the highlands of Peru and it eventually became a staple in many parts of the world. Not only did it taste good, but farmers could harvest more calories per acre than grain. When starvation is a real possibility, the more food you can harvest, the better.

But, of course, we know that just because a food is popular that doesn’t mean that it is good for us.

Most paleo food isn’t literally of the Paleolithic era

With modern chronic disease affecting many folks, it’s easy to reason that the foods our ancestors ate in the Paleolithic era must be our ideal food.

They weren’t farming potatoes, so potatoes are out.

But let’s be honest: It’s pretty hard to know exactly what our Paleolithic ancestors were eating. We can only make educated guesses based on examining bones and considering archaeological evidence.

The second consideration is that even if we did know exactly what they ate, are those foods still around?

Free range chicken and beef are our modern day paleo diet versions of wild birds and beasts. And no matter how organic our produce is, our Paleolithic ancestors weren’t munching down on romaine lettuce and green peppers.

The modern day paleo diet includes foods that didn’t even exist way back when. So there must be another guiding factor into which foods are part of a paleo diet or not.

The toxins in potato peels

Certain common foods have elements that are still difficult for people to digest or outright noxious, like rancid seed oils, and it’s best to avoid these foods.

This approach combines evolutionary principles with what we know of the digestion system to determine what foods best support and nourish humans.

How do potatoes stack up?

Potatoes have compounds called glycoalkaloids. Various studies show negative effects of glycoalkaloids in animals, from diarrhea to liver damage. While glycoalkaloids are considered toxic, the amount used in studies are far and above what you could eat in a few potatoes, or even a lot of potatoes. Normal amounts have not been shown to be harmful in people.

On the flip side, glycoalkaloids in potato peels fight three pathogenic strains of trichomonads, one of which is the parasite that causes the STI trich. So it’s good for something!

Fortunately, the higher amount of glycoalkaloids, the stronger bitter taste it will have (think green potatoes). You won’t want to eat high levels of it. In addition, you can peel potatoes, where most of the glycoalkaloids occur, and make sure to avoid parts of potatoes that have gone green.

Other than glycoalkaloids, potatoes are low in compounds that could be considered toxic or unhealthy for humans.

Potatoes have gotten a bad rap because they’re high in carbs and low in nutrients, similar to other white foods like sugar and flour.

However, if you compare the nutritional profile of sweet potatoes and white potatoes, most vitamins and minerals are in comparable amounts except vitamin A, or more accurately a precursor of vitamin A that is difficult for the body to convert.

And, compared to paleo-approved foods like seeds and nuts, potatoes have no phytic acid that interferes with the absorption of the minerals.

What about the carb count?

Keep in mind that the paleo diet is not a low-carb diet but attempts to select the foods that best agree with our bodies. White potatoes do have a higher glycemic index than sweet potatoes, but that mostly indicates that they are higher in glucose than in fructose – which is actually a good thing. Humans have an enzyme called amylase that breaks down glucose into usable energy, while fructose is shuttled off to the liver and stored as fat.

White potatoes also have better amounts of each type of simple sugar. Whereas sweet potatoes are high in sucrose, maltose, and fructose compared to white potatoes.

Despite their color and carb count, potatoes are not a refined product like sugar or flour. They are a whole food and a complete protein.

Purple potatoes especially are high in phytonutrients; anthocyanins give them their vibrant purple color, acting as an antioxidant and prebiotic.

Speaking of prebiotics, one benefit to eating cooked and then cooled potatoes is that they’re full of prebiotics in the form of resistant starch – food for the good bacteria in your gut. After cooling, the potatoes can be heated again and still maintain the prebiotic benefit.

And although not recommended as a diet, Chris Voigt ate nothing but potatoes for 60 days. He found that he lost weight, reduced his cholesterol by 60 points, stopped snoring, and even had a lower fasting glucose level – all while eating to fullness and having lots of energy.

Of course, we can’t say that potatoes caused these results, but they didn’t stop those good results from happening either.

Reasons to not eat potatoes

For those who want to minimize how many carbohydrates they consume, like How To Succeed With A Low Carb Meal Plan folks on a keto diet, it’s best to avoid potatoes.

Potatoes are also part of the nightshade family, which means they off the menu if you want to What Is The AIP Diet? reduce inflammation and follow an AIP diet.

Of course, if you find that potatoes do not agree with you personally, it is also best to avoid them.

In the end, potatoes technically aren’t paleo. But that doesn’t mean that you can’t add them to your version of the paleo diet.

If you decide that potatoes are a good fit for you and your family, there are plenty of paleo recipes that include white, purple, and red potatoes. Just use the Real Plans app to add potatoes to your paleo meal plan. 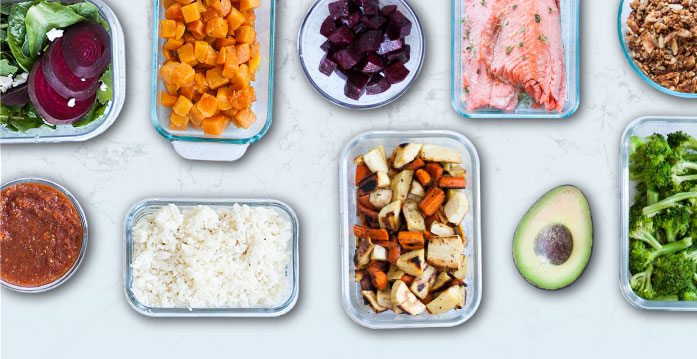